A few haiku and tanka that I was working on while watching Monday’s snow and ice. I prefer cool weather, but even I’m tired of winter at this point!

storm of black and white bullets

racing head and foot into

Their name is descriptive, it means straight horn. They were soft bodied creatures that lived in the newest segment of the shell. Periodically they would grow a separating wall called a septa and close off the too small part of the shell. The different composition of septa and the external shell allowed them to fossilize differently, so we can still see their shapes today. (The curved lines running perpendicular to the outline of the fossil.)

The long channel you can see running along the center of the fossil-two parallel thin dark lines-was a hole that housed a strand of tissue called the siphuncle. It was (and is in nautiluses today) a way for them to filter water in and out of closed chambers, controlling buoyancy.

They probably worked in a similar fashion to those of creatures living today. It’s a pretty interesting method of control. It isn’t a muscular thing like you’d imagine. Instead it works by osmosis. Basically the change was controlled by blood salinity. Water would move from areas of lower salinity to higher in an attempt to achieve an equilibrium. Gases dissolved in the blood would slowly fill the chambers as the water moved elsewhere.

Despite the likelihood of this passive method of control, some propose that this might also have aided in propulsion.

Since all of orthoceras relatives were/are predators, it is fair to guess that they were as well.

Their fossils are often found in assemblages-like sheets of them mostly parallel-the only species present. It looks like an Edward Gorey inspired repeating wallpaper pattern! You see beautiful displays of them in museums or at fossil shows. (I’ve also seen really cool things made out of them, including the best bathroom sink ever!) Interestingly these groupings are found mostly amongst the older of the fossils.

Scientists aren’t sure why this is. Some believe it is evidence of post mating mass deaths, others that they simply traveled in schools. It’s been suggested that they are aligned so nicely because they shifted after death due to currents over the ocean floor.

I’m fascinated by the elegant simplicity of orthoceras fossils. They’re often black and gray and the smooth bullet like shape is a lot of fun to work with. It suits a lot of different styles. In my most recent turn with them I used three different colors of wire to try to mimic the tones and striped effect of the chambers in a simple woven frame.

tongues of red, the greens and stems

a chic warning, do not eat!

Tagged as another year of too early for snow, if you don't like the weather in new england wait a minute, nature, poetry, tanka, weather, winter 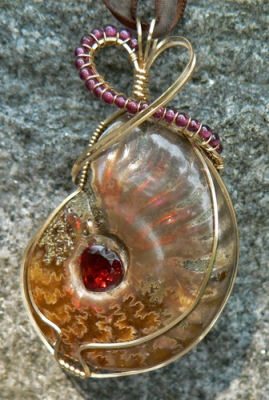 A whole ammonite this time, chambers well hidden but polished to show off the wonderful iridescence these guys sometimes have.

I posted another ammonite, so decided I might as well share another of my fossil tanka. Because sometimes you just have to write on an improbable prompt to keep from going mad from boredom (or frustration) at work!

rooting in the stony past

work out of water-why is

Tagged as poetry, so not a heat person, summer, tanka

Finally got to see fireworks

to oohs and ahhs and silence.

Tagged as fireworks, fourth of July, inner pyro, poetry, tanka, they aren't fireworks if you can't feel the concussion in your chest

Meteorites are natural objects composed of stone, metal, or a combination of the two that have survived their fall from space through our atmosphere. Most meteorites come from asteroids, a small percentage from Mars and the moon, a very few may even originate from comets.

Those that come from asteroids are the oldest objects that are available for direct study. (As opposed to the light from ancient stars, which we can see but not touch…) They date back about 4.5 billion years, to the first stages of the creation of the solar system. So they can give scientists insight into the processes that made our sun and its planets.

(FYI- Asteroids are not exploded planets, they’re the bits that never made it into planets, possibly because Jupiter’s gravitational pull was too strong for them to coalesce.)

Stone meteorites are mostly silicate rock very much like Earth’s crust. Iron meteorites are actually iron with different percentages of nickel. The stony-iron meteorites are just that. Though what’s really neat is that some have crystals of the gemstone peridot (or olivine) in them. So when you see a sample it’s this literally space age slice of metal with green gems embedded in it.

Just to confuse things–meteors–the ones you see in showers and normally are associated with the orbits of comets–don’t generally become meteorites. It’s very rare for there to be enough material to be recovered, the norm is complete vaporization.

Meteorites start as larger objects, called meteoroids. One would be travelling at around 67,500 mph when it hits our atmosphere and is slowed by the friction. The outer part melts off and the droplets are carried away–at this point, though slowed by the atmosphere it is still moving fast enough to create shock waves. As it cools and falls the melted surface forms a glassy coating known as a fusion crust. Once it (or its pieces if it explodes in the air) hit the ground it’s officially a meteorite.

Around a thousand meteorites bigger than a soccer ball strike the Earth’s atmosphere every day.

Yes, people have been hit by meteorites… I wonder if insurance covers that?

variation on a theme 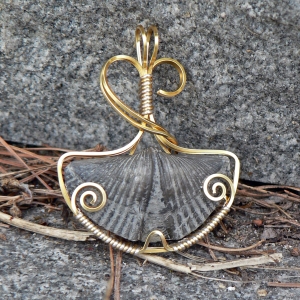 Brachiopods (literally arm-foot) appeared at the beginning of the Cambrian and peaked during the Ordovician (490-445 mya).

What’s fascinating is that while most of them have gone extinct, some species of brachiopod are still around, so it’s a story of survival. Even though I’m working with fossils of creatures that died hundreds of millions of years ago, a number of their descendants and cousins are still on sea floors the world over. (Around 100 different genera still exist, over 5000 are known to have existed.)

Brachiopods are bottom feeding marine creatures with two shells. (You can see the lip of their joint nicely in the fossils I picked up.) They’re symmetrical when viewed from above, unlike bivalves.

Mine are members of the spiriferidia. I think they’re of the Mucrospirifer genus. Some of the rock hounds on deviantart are thinking along the same lines, but I don’t have a location of origin to narrow matters down.

The one I bought more recently was from southwest Ontario and identified as a Mucrospirifer thedfordensis from the mid Devonian. (That’s about 385 million years ago.) My previous stash were probably from the same general area. (I’ve been told New York State is another possible origin.) This genus reached its highest levels of number and diversity during this period, so it’s a probably a safe guess that all the ones I’ve worked with are all (loosely!) around the same age.

I’m not sure all of my original stash were of the same species to begin with; since some were chubbier like the thedfordensis and others were much slimmer, though they all share the same basic shape and nice curve. I don’t know how much variation existed between individuals of a species.

(I’m not very good at identifying fossils beyond the general. Anyone know of a good, *simple* guide for fossils? I like playing with ammonites too but can never divide them into species either.)

They would have lived in soft mud on the sea floor and attached to the bottom with a fleshy stalk. They were found all over the world. Brachiopods took a hit at the end of the Devonian period, but a diverse number survived into the next hundred million years. A lot of brachiopod species went extinct during the Permian Mass Extinction ( about 251 mya), along with a lot of the other ‘classic’ species we’re familiar with–like the trilobites. The corals of the era were so badly destroyed it took over 10 million years for them to recover, and 150 million for biodiversity to bounce back to pre-extinction levels. (Some of the Mucrospirifers survived the Permian Mass Extinction and held on into the Jurassic period.)

Walking past the brachiopods on a dealer’s table en masse they reminded me of fallen ginkgo leaves. I decided that I had to play with that resemblance by wrapping them with ‘stems.’ Now I want more to experiment with, and to learn how to properly identify the little suckers. I’d really like to take the term butterfly shells literally and do a butterfly shaped wrap somehow.

(Yes, I wrote a tanka over a fossil, I wrote a few about different types actually…)