Child of the wandering sea

This is the ship of pearl, which, poets feign,

The venturous bark that flings

On the sweet summer wind its purpled wings

In gulfs enchanted, where the Siren sings, 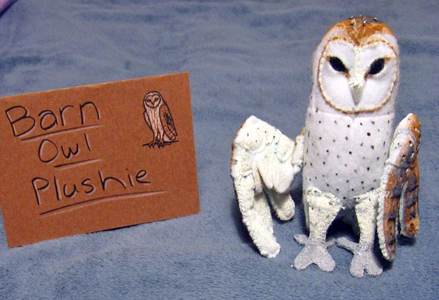 An adorable barn owl plush Arras made awhile back.

Losing Altitude is a kickstarter project I’m tangentially connected with. It will be a collaborative art book highlighting endangered bird species from all over the world.

Arras (animuspanthera on both deviantart and etsy) has gathered dozens of artists (also from all over the world) to illustrate their favorite endangered species in their own unique styles. Each illustration will be accompanied by information about the species.

There’s already have a tease of some of the gorgeous and exuberant art that will be included.

Pia Ravenari is working on some intricate and stunningly colored parrots.

And Tania Avila Villalba has a strikingly austere Javan hawk-eagle.

Not having the illustrative skills to contribute directly I offered some of my tree and key pendants to use toward incentives.

I’m excited this is finally live, kind of silly, but I made a bird treasury on etsy in honor of its inception. I hope it goes, I would really love to see this book in print! (I have a place on my bookshelves all picked out…)

Meteorites are natural objects composed of stone, metal, or a combination of the two that have survived their fall from space through our atmosphere. Most meteorites come from asteroids, a small percentage from Mars and the moon, a very few may even originate from comets.

Those that come from asteroids are the oldest objects that are available for direct study. (As opposed to the light from ancient stars, which we can see but not touch…) They date back about 4.5 billion years, to the first stages of the creation of the solar system. So they can give scientists insight into the processes that made our sun and its planets.

(FYI- Asteroids are not exploded planets, they’re the bits that never made it into planets, possibly because Jupiter’s gravitational pull was too strong for them to coalesce.)

Stone meteorites are mostly silicate rock very much like Earth’s crust. Iron meteorites are actually iron with different percentages of nickel. The stony-iron meteorites are just that. Though what’s really neat is that some have crystals of the gemstone peridot (or olivine) in them. So when you see a sample it’s this literally space age slice of metal with green gems embedded in it.

Just to confuse things–meteors–the ones you see in showers and normally are associated with the orbits of comets–don’t generally become meteorites. It’s very rare for there to be enough material to be recovered, the norm is complete vaporization.

Meteorites start as larger objects, called meteoroids. One would be travelling at around 67,500 mph when it hits our atmosphere and is slowed by the friction. The outer part melts off and the droplets are carried away–at this point, though slowed by the atmosphere it is still moving fast enough to create shock waves. As it cools and falls the melted surface forms a glassy coating known as a fusion crust. Once it (or its pieces if it explodes in the air) hit the ground it’s officially a meteorite.

Around a thousand meteorites bigger than a soccer ball strike the Earth’s atmosphere every day.

Yes, people have been hit by meteorites… I wonder if insurance covers that?

If you’re in the northeastern US you can now find some of my fossil wire work jewelry in the gift shop at the Connecticut Dinosaur State Park.

It’s a small place, but a great visit on a nice day. The centerpiece of it is a fossilized track made by carnivorous dinosaurs in the early Jurassic. (Think something like Dilophosaurus from the movie Jurassic Park.) It also has some displays for children explaining how fossilization occurs (and why a good area for fossilizing tracks is a poor one for fossilizing bones), and interactive exhibits on local geography with specimens children can handle.

They also have some very pretty short walking trails, with periodic signs explaining the geological history of the area and talking about the local species and their natural history. My favorite is that they have an arboretum with unusual species, and some interesting conifers. With labels! It really bugs me when botanical gardens don’t actually identify the species, so it’s a touch I appreciate when I find it.

Besides, the people there have a good/offbeat sense of humor. They had a sign “It’s a gneiss day, don’t take it for granite!” So following that wisdom my friend and I went for a short hike to take advantage of a nice sunny day.