Garnet is January’s traditional birthstone. I don’t get to work with it as often as I’d like. As a gemstone it’s hard to find large enough to tie into wirework, but I like to use it in beaded accents. I especially love to combine it with pale gems like moonstone and rutilated quartz. Garnet can bring a piece a very modern dramatic feel, or give it a sense of depth and history.

After all, it’s a gemstone with a long history.

By the bronze age people were using it both in jewelry and as an abrasive. It’s been found in ancient Egyptian, Greek and Roman jewelry. In ancient times garnets were carried by explorers as talismans against the dangers of the dark.

The name garnet comes from the Latin word for grain, probably because the red crystals reminded people of pomegranate seeds. 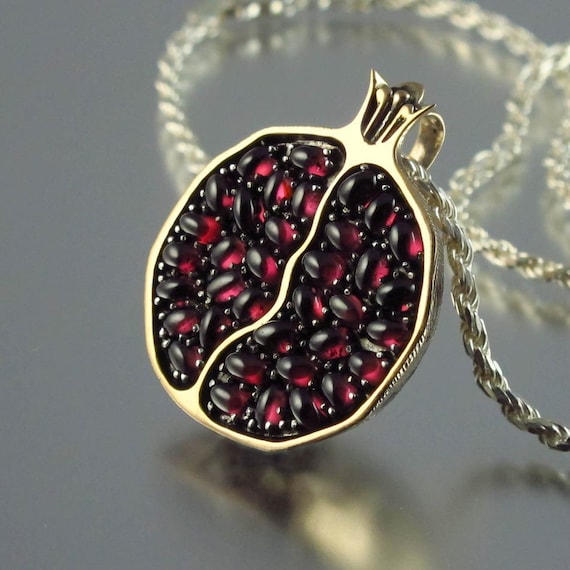 In Anglo-Saxon times square garnets set in gold for a cloisonné effect were inspired by garnet and enamel pieces all the way from Byzantium! Garnet is the name for a group of different types of stones with similar chemical forms but different chemical compositions.

Different chemicals=different colors, not all garnets are red! These are called different species of garnet.

Some of the garnet spectrum…

The three species you’re most likely to come across are:

-Almandine-one of the hardest. The good quality dark wine red is used for gems and the lesser as grit for drills and sandpaper. This is probably the one that pops to mind when someone says garnet.

Burning coal, wire wrap of a garnet crystal in schist.

For those of you who like reading historical novels, almandine is what was once called carbuncle. That word has roots in the Latin for live coal-you can see crystals of garnet embedded in metamorphic rocks.

-Pyrope-(from the Greek for fire-eyed-is it bad that I think that would be a great name?) is mostly red in color, crimson with a hint of orange.

My favorite version of this species is called rhodolite garnet. (Found in North Carolina and East Africa, go figure.) It’s a chemical mix between pyrope and almandine and somehow looks like neither. It has a wonderful purplish pink cast. Rhodolite is almost always cut into gemstones and rarely made into beads or chips.

-Grossularite-garnets are often really pretty, despite the terrible sounding name! (Apparently it derives from a name for gooseberry, what the crystal clusters are supposed to resemble!)

One variation of this is tsavorite garnet, which is an amazingly beautiful green created by traces of chromium. It’s only been known since the seventies and is still working its way into the market, but it’s gotten much more popular in the last decade or so. (Perhaps as good quality emeralds are getting harder to come by?)  If green were a primary color, it’d be tsavorite. Sadly the crystals are normally found shattered, so large stones are rare.

Garnets practically run the spectrum. They’re a little short on blue, but there are rare blue-green ones that change to purple under incandescent light!

(*Note on the care and feeding of garnets: soap and water are your best options. Most almandine and pyrope and pretty stable, but some species can be hurt by sonic or steam cleaning.)

A chart with further species and varieties of garnet

A whole ammonite this time, chambers well hidden but polished to show off the wonderful iridescence these guys sometimes have.

I posted another ammonite, so decided I might as well share another of my fossil tanka. Because sometimes you just have to write on an improbable prompt to keep from going mad from boredom (or frustration) at work!

rooting in the stony past

January is named after the Roman god Janus, the god of doorways and beginnings and endings (and smooth and crunchy peanut butter…) I’ll admit that I’m glad enough to slam the door on the past year! Here’s looking toward a better one.

After trying to size up my trees for a project for a coworker I ended up playing around a great deal with trying to size them down a bit more instead. And then got hooked trying to figure how to adapt my copper style to silver and gold fill. My favorite is a pearl and moonstone one I made to look like the snowstorm we *finally* got outside. Turned out nicely, not the most photogenic of pieces. So instead, here’s a garnet one, in honor of January’s birthstone.