Almost time for dragoncon… I’m looking forward to the skeptrack lectures, the costumes, actors and authors, crafts, geekery and the general joyous nerdiness.

*Keep calm and carry on packing*

It seemed like the right time for another favorite Carl Sagan quote from The Demon Haunted World: Science as a Candle in the Dark:

The tenets of skepticism do not require an advanced degree to master, as most successful used car buyers demonstrate. The whole idea of a democratic application of skepticism is that everyone should have the essential tools to effectively and constructively evaluate claims to knowledge. All science asks is how to employ the same levels of skepticism we use in buying a used car or in judging the quality of analgesics or beer from their television commercials.

But the tools of skepticism are generally unavailable to the citizens of our society. They’re hardly ever mentioned in the schools, even in the presentation of science, its most ardent practitioner, although skepticism repeatedly sprouts spontaneously out of the disappointments of everyday life. Our politics, economics, advertising, and religions (New Age and Old) are awash in credulity. Those who have something to sell, those who wish to influence public opinion, those in power, a skeptic might suggest, have a vested interest in discouraging skepticism.”

Trying to get to Atlanta!

Quick personal query. I really want to go to Dragon*con. Things went as they do, and stuff… lost the chance to get into the proper hotels. Now a coworker I had a slight chance of rooming with is going with her husband, so that’s out too. It’s getting 11th hour, but I just got the booklet in the mail rubbing in just how much I want to go. So even costumeless, I’m not quite resigned to not going just yet.

Is anyone going or know anyone (relatively not scary…) looking for a roomie? The official-ish hunt seems to be mostly a facebook thing and I haven’t gotten facebook straightened out yet!

As you’ve learned, I make crafts, am a bit of a science fangirl, and admire folklore and fantasy writing and art. Geek-wise I’m an avid whovian/sherlockian with a bit of a browncoat leaning. Last year my favorite track at the con was Skeptrack. I’m quiet in person unless you ask about one of said topics, not much of a party girl (sometimes for lack of invites and sometimes from shyness), and a nonsmoker.

Let me know if you have any ideas, please!

Two books I’ve finished in the past week and wanted to make note of and recommend to anybody looking for thought provoking and enjoyable summer reads.

One is called Malled: My Unintentional Career in Retail. It’s by Caitlin Kelly. She is a journalist who took a part time retail position after losing her job with The New York Daily News. She kept her retail position for over two years.

Malled is a book that should be required reading for everyone who has ever gone shopping!

It is a mix of personal experience and research, making it both an enjoyable memoir and an interesting profile of retail business. As a retail worker I liked it because of her enjoyable and fluent writing and because of her clear eyed look at that world. It is also one of the few business books I’ve run across that gives the workers a fair view. The only downside for me was that parts of it were a little too close to home, which made it a less than relaxing break time read. 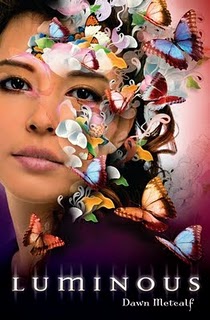 The other is a book I’ve mentioned here before, Luminous, by Dawn Metcalf. It came out June 30th, so after hearing snippets for ages I was finally able to read it. It was gorgeous and more than a little surreal. Luminous is an excellent adjective as well as title for the look. Luminous is a young adult fantasy/adventure title. The main character is a young woman who finds that she can shed her skin and walk abroad in a world between life and death. It’s a visual read, very beautiful and richly descriptive. (I told a friend that it made me think of a Salvador Dali done in Maxfield Parrish’s palette.)

I thought this was cute, an interview with the main character on a young adult book review site.

Lord, what fools these mortals be! Or Happy Maximum Tilt Day…

The image that first got me hooked on Arthur Rackham and his Shakespeare illustrations.

If we shadows have offended,
Think but this, and all is mended,
That you have but slumber’d here
While these visions did appear.

And this weak and idle theme,
No more yielding but a dream,
Gentles, do not reprehend:
if you pardon, we will mend:
And, as I am an honest Puck,
If we have unearned luck
Now to ‘scape the serpent’s tongue,
We will make amends ere long;
Else the Puck a liar call;
So, good night unto you all.
Give me your hands, if we be friends,
And Robin shall restore amends.

Puck’s speech from A Midsummer Night’s Dream, Act 5, scene i

In honor of the summer solstice (and to pair with my previous Tempest post) I decided to be a little bit brave and post an old poem I wrote in college in response to A Midsummer Night’s Dream.

I don’t remember what the assignment was, but I chose to play with Titania’s character. I always felt kind of bad for her at the end of a Midsummer Night’s Dream. All she was trying to do was take charge of the child of an old retainer and yet her husband chose to make an absolute fool of her.

(a response to Shakespeare’s A Midsummer Night’s Dream)

shadow cast under a quicksilver moon.

Oh yes, these shadows have offended.

plays with truth, and breaks his toys.

He knows his herbs and potions—

the bitter bite of wormwood—

He serves his lord and master well.

He made me a fool before my court,

My ladies laughed behind their hands.

He bathed my eyes in purple poison—

made me love unwillingly

and waste my favors on a hairy beast.

My eyes were cleansed,

I can wait, I shall bide my time.

I can counterfeit a proper wife.

In their arrogance they believe,

would bend my will so easily.

though it take me centuries,

I will be avenged.

Like The Tempest, A Midsummer Night’s Dream is believed to have been written to celebrate an important wedding and is a mostly original story. (The play within a play is based on Greek mythology, as are the names of the rulers.) The super short version of the story is “Mix-and-match couples in the woods near Athens.” as Shakespeare for Dummies puts it! It’s a play about many things but basically all the ways love messes with people’s heads.

I’ve been too sick to come up with anything clever, but I had to mention Digger, a webcomic by Ursula Vernon. I’ve been addicted to this clever, inventive, cultured and utterly insane comic for years now. It’s finally ended and I feel suddenly bereft. If you’ve managed to miss it, start from the beginning here. I don’t think I can praise it highly enough. It’s been a joy to watch the artist’s development throughout the comic, and the fan comments underneath each comic can be nearly as entertaining as the strip.