A Tip of the Hat Today is Mad Hatter Day. (At least in the US. I guess it’d be June 10th in Europe.) Mad Hatter Day was inspired by Lewis Carroll’s Alice in Wonderland.

In Sir John Tenniel’s original illustrations the Hatter’s hat has a label reading ‘In this style 10/6’ meaning it would cost 10 shillings sixpence.

But 10/6 was seized on as a date in 1986 by computer techs in Boulder, Colorado who decided we needed another unapologetically crazy day to break up the monotony from one April Fool’s Day to the next. It gained in popularity over the next few years.

For a bit more history as well as some great snark and celebration ideas check out mad Hatter.

Mad Hatter Day is a fun idea (though why don’t we call it Hatterday?) but its inspiration is routed in some depressing truths about industry.

We call him the Mad Hatter today, but Lewis Carrol never referred to the character that way. The Cheshire cat does refer to him as mad (though who is he to define sane?!), and the saying mad as a hatter predates Carrol’s usage by at least 30 years.

The reasoning I’d always heard was that the process of making the omnipresent felt hats left hatters at serious risk of mercury poisoning. In the 19th century hatters used mercury nitrate to separate fur from skin to make felted hats. Chronic exposure to mercury either in the processing of the felt or working in enclosed spaces where they used mercury vapors to shape and size the felt led to mercury poisoning.

It was recognized as an occupational hazard in many countries. It was noted in Russia in 1829, and in New Jersey 30 years later when a New Jersey physician wrote an article about the disease in local industry. In 1869 the French Academy of Medicine acknowledged the danger. By the turn of the century legislation in France had been passed to protect milliners and the disease had mostly disappeared in Great Britain as well.

Alternatives to mercury were proposed as early as 1874. But, in the U.S. at least, they were largely ignored. Workers considered hatter’s tremors the cost of having steady work while their employers continued to claim to be unaware of the ailment. By 1934 it was estimated that around 80% of American hatters suffered tremors from mercury.

In 1941 the U.S. banned the use of mercury in felt making-not for the safety of the workers but because it was needed for the war. 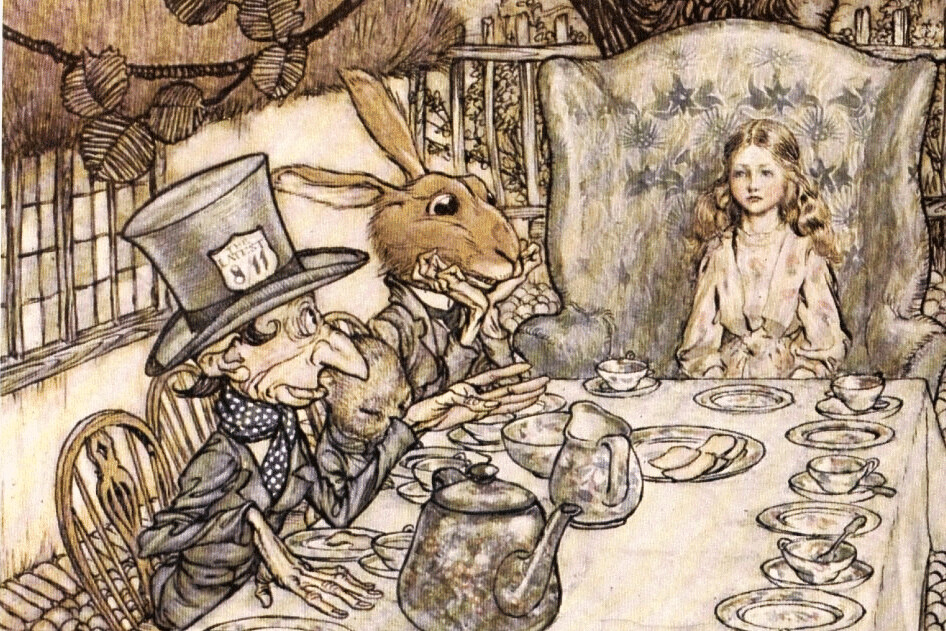 So it’s the wrong date for the Hatter, but I confess I generally like the slightly later and less iconic Arthur Rackham illustrations of Alice in Wonderland!