The Autumn side of August

The green gemstone peridot is the most popular birthstone for August, but it has another, less gemmy birthstone, sardonyx. It seems fitting that one of August’s stones is all sparkle and leaf green, while the other is duller and browner and edging into fall.

Sardonyx is a type of onyx that can be found in shades of browns and reds as mixed with black or white. It’s more common than black onyx (which is naturally bands of black and white-not solid), but since black onyx is a higher demand stone, sardonyx is often dyed black. The sard prefix probably comes from a Persian root for yellowish red. Its colors form very even and straight bands.

It can be found all over the world, though the best quality is said to come from India. 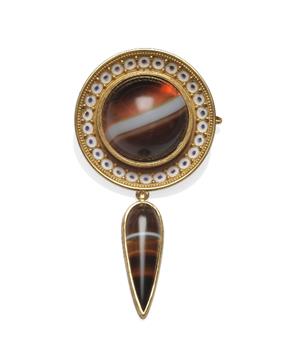 It’s been known since ancient times. It’s not a rare gem, so it’s popularity seems to come more from how wells its colors fit popular uses. The straight bands of color allowed for even very large cameos and intaglios where the image is in one band of color and the background another. The Greeks and Romans engraved talismans for bravery and victory often featuring Hercules. (I’m not finding why they associated it with military valor-perhaps the ruddy hue? Have any of you run across any myths there?)

Cameo is a type of carving-often jewelry, sometimes in decorative objects-that leaves a raised relief image. Shells and striped semiprecious stones are ideal for them.

Intaglios are carved in-recessed images rather than relief. Like many signet rings and personal stamps have designs that are carved into the flat back of the stone.

Originally cameo only referred to gems where the carving and its background were of different colors. These were created by carving into a banded stone, leaving one color layer for the relief and carving down to the next color layer for the base. They can also be made from layered glass. This type of imitation gemstone cameo dates all the way back to Roman times.

Cameos were popular in Ancient Rome, and seem to have a revival every time the classical eras come back into fashion. (Eg the Renaissance, Neoclassical art, Victorian England…)