Niobium is a silver grey metal that holds number 41 on the periodic table. It sits just above tantalum, number 73.

Besides both being silver-grey transition metals vital to modern technologies they have a classical as well as elemental relationship. In Greek Mythology Tantalus was Niobe’s father. 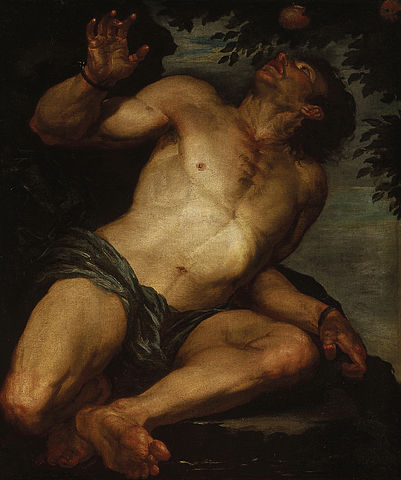 Tantalus is probably most recognizable from the word tantalize. He was a son of Zeus who killed and served his son to the Gods and was punished in Hades by eternally being stuck in water with low hanging fruit over his head. But if he reached up the fruit escaped his grasp and when he bent for a drink the water would recede.

Greek writers held his daughter Niobe as an example of hubris-pride before the gods. She was angry that her people should worship the mother of the gods Apollo and Artemis, a woman who only had one son and one daughter, while she had seven of each.

This boasting was punished with Apollo slaughtering all of her sons and Artemis all of her daughters. Niobe was turned to a rock, left to weep for all time.

Yet the metals named after them are extremely stable. Tantalum was discovered first, but the chemists that isolated it thought that the sample contained two other elements and named them after Tantalus’s children. Ultimately they discovered that only one other element was present. The proposed pelopium (after the served for dinner child) was discarded, niobium remained.

Tantalum supposedly got its name from its resistance to acids-as something that could not react to them.

Tantalum is hardly an everyday word but we use it every day. To use that popular term- it’s a problematic favorite. It’s used in capacitators in pretty much every electronic device; its inertness makes it valuable as a platinum replacement for experimental equipment and also for medical implants.

Tantalum is considered a conflict resource, since one of the mineral sources is a major export for the Congo- as Theo Gray put it “Gorillas are dying to fund guerilla wars, and all for tantalum.” Better sources are continuously being explored, but there’s also a concern that with currant usage we only have about 50 years’ worth of this element left. Besides finding better sources we need to get better at recycling it!

Niobium is a versatile metal. Alloys with Niobium are used in rocket nozzles because they resist corrosion even at extreme temperatures. Slightly more down to earth, it’s also alloyed with titanium to creature the magnetic fields in MRI machines.

Niobium can be anodized to create thin oxidized layers in many colors. It’s become a popular alternate metal choice for jewelry because of the great combination of rainbow colored charm and high corrosion resistance.

In anodizing a direct current is run through the metal which creates a chemical reaction that results in layers of oxidation on the surface. The voltage used determines the thickness of the layers. Light travels differently reflecting off and going through different thicknesses before reaching the underlying niobium- which determines the colors.

A rainbow of anodized niobium, lots of great colors but none quite a hypoallergenic match for copper.

Fair warning-the coating on niobium jewelry doesn’t chip easily, it’s tough but thin. So if you have niobium and sterling silver mixed metal jewelry you need to polish it chemically and not with a polishing cloth or else you’ll ruin said jewelry since it can’t be re-oxidized without removing it from the silver.